Posted by Sailorgirlfriend.com on Thursday, May 14, 2015 Under: Syringoma
I started removing syringomas twice a year on my face 2 years ago. I've had syringomas since I was in my early 20s so it's been over a decade now. I used to wear make up a lot so I would cover them up but not really paid any attention to how they've really grown (in numbers and in size) over the years. I think that is something we girls often do; is that we focus so much more on the facade, our make up, that we forget about how to really take care of our own real skin.

(Syringomas I targeted to remove)
I was on a road trip with my husband and baby last month and decided to take a picture of my syringomas using natural lighting from the outside. Here were the problem areas that I circled in the picture.

They were noticeable when I took close shots. This picture was taken by my iPad so it was not a high quality camera but you can still see them. Imagine if you are on a date and he or she is sitting right next to you staring at your face with these syringomas!

I've been continually going back to the Wart & Mole Vanish box to burn them off. Essentially that is what we are doing to our faces when we use these types of products. Oh the price we pay to have better skin! I've successfully removed the biggest ones (the most noticeable ones) during the first year while I was pregnant. Sometimes they are removed and sometimes I didn't do a good job of penetrating it enough because I didn't scratch well enough or apply enough of the product. I do get some scarring but they fade and look better after awhile. I've learned a lot from doing it 5 times and it's still scary every time I do it. The burn still stings a lot and my face gets all red with swell spots from where I applied them.

Since it is the same routine over and over again, I didn't upload any new youtube videos of my recent application/experimentation. This month, I used the Wart & Mole Vanish again. The last time I used it was December 2014. Here is the picture of how my face looked after applying it. Warning: the picture looks gross! The scabs developed very quickly after I applied the product. 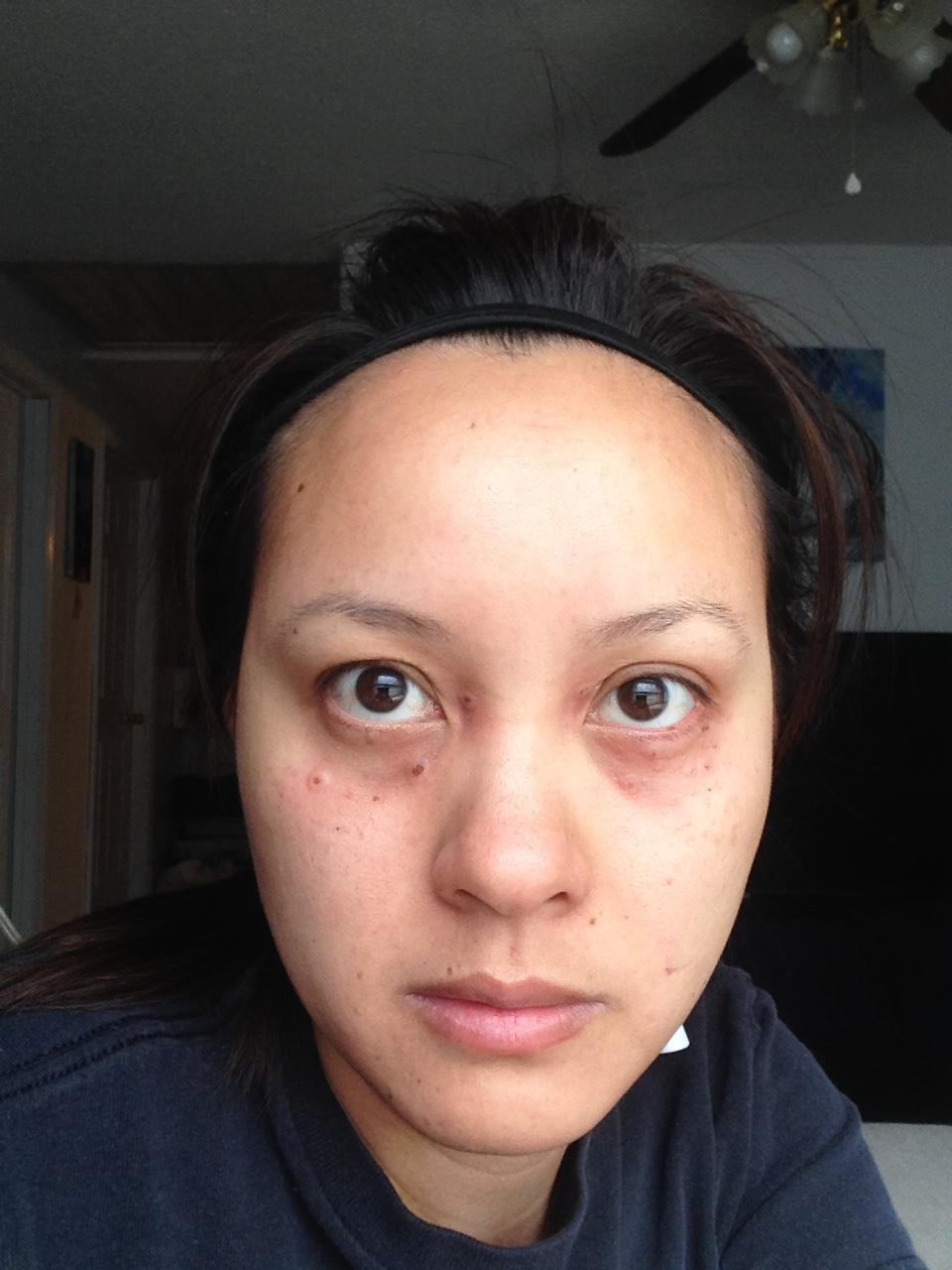 Notice the swell spots in the above picture around my eyes? Those puffed up probably between 5-10 minutes after I applied it. I focused on 3 major spots on the left side and then about 10 little spots on the right this time around. I already know that one application will never eliminate all syringomas. More will grow in other areas and some scarring (some more noticeable than others) will take place in the places where I treated with the Wart & Mole Vanish.

The thing is: syringomas will never stop growing no matter what you do or whether you treat them or not! So I've made up my mind, I rather have as few noticeable syringomas on my face at any given time as possible because 50 on your face will get too overwhelming to treat or look at! With that in mind, I figured I would write down some tips and share with you guys from what I learned.

Tips when using Wart & Mole Vanish
Those are all the tips I have for now. Good luck with your treatment and treat them with whatever product you are using at your own risk! I am not a medical professional or a paid endorser. I am just a normal girl with syringoma issues that used to make me really, really depressed. All I want to do is help a person with the same problems as I did. I remember feeling really helpless after I saw a dermatologist years ago and he said my syringomas will never permanently go away and that they will continue to grow. I finally was brave enough to try to put them under control myself and my self esteem has been better than it's ever been!

Before I started treating my syringomas, I had over 50 on my face! I had about 8 gnarly big ones that you could see whenever someone would take a close up picture of me within a yard away, even when I was wearing make up. Now, I've narrowed down to about 20 small ones on my face. I believe in moderation and doing it carefully.

I hope this is all helpful.
Good luck guys!

Tags: tips on removing syringoma
« Back to posts